Upwelling phenomenon in the marine regions of Southern Central of Vietnam: a review

Upwelling is an oceanographic phenomenon that not only involves to the physical process, but also contributes to the changes in the term of chemistry, biology and natural resources. So, systematically, it is the special ecosystems of whole marine regions with the upwelling. The strong upwelling waters in South Central Regions of Vietnam not only have uncertain features of the East Vietnam Sea (Bien Dong, Vietnam) but also has special characteristic of a coastal upwelling area, recorded in the international scientific papers in twentieth century. Their first signals were discovered in early years of 1930s through conceptual ideas. The upwelling phenomenon is officially confirmed by scientific results of marine investigations of NAGA Expedition (1959–1961). The paper aims to review and discuss the physical from Vietnamese investigation and results since 1990s. These factors are the most contribution to form and develop the strong upwelling in Southern Central Waters: (1) Influence scale (Mezo- and micro-scale); (2) Forming causes and developing mechanism of upwelling phenomenon, such as monsoon, morphography, shoreline, western boundary current system of the East Vietnam Sea; (3) Influence of the water-mass from Mekong River on the upwelling area; (4) Ecological environmental consequences; (5) impacts of the atmospheric-oceanic interaction processes on the western East Vietnam Sea on upwelling. Additionally, the review has also targeted to findings of upwelling phenomenon mainly in Vietnamese waters based on remote sensing analysis and reanalysis data series to simulate their forming, mechanizing, fluctuating models as well as the impacts of upwelling in the East Vietnam Sea on resources and ecosystems. The coupled atmosphere-ocean models resulted the upwelling mechanisms and formation. The long time-series of upwelling phenomenon (Macroscale) were evaluated by remote sensing and reanalyzed data series. It is also providing the supplementing and detailing causes and mechanisms of upwelling formation; impacts and interactions of upwelling on marine physics and hydrodynamics (ocean vortexes, seawater temperature), biochemical (nutrients, plankton organisms), and resources (fish, seafood). Within the framework of strong upwelling waters in the Southern Central Regions (Vietnam), the review has not only mentioned partly clarified scientific results but also indicates the limitations and challenges which were faced and encountered in the forecasters of upwelling phenomena in the future. 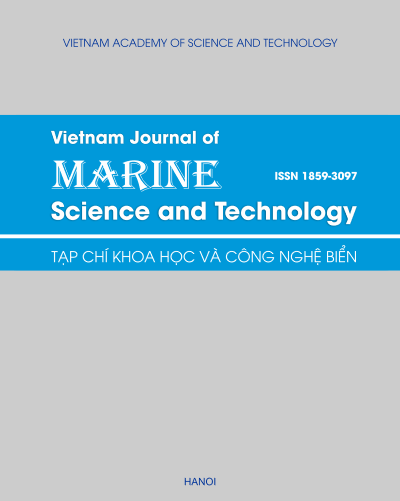 Dear: The Editorial Board Members and Contributors